KADE VERWEY BACK IN THE POINTS AT BRANDS HATCH FINALE 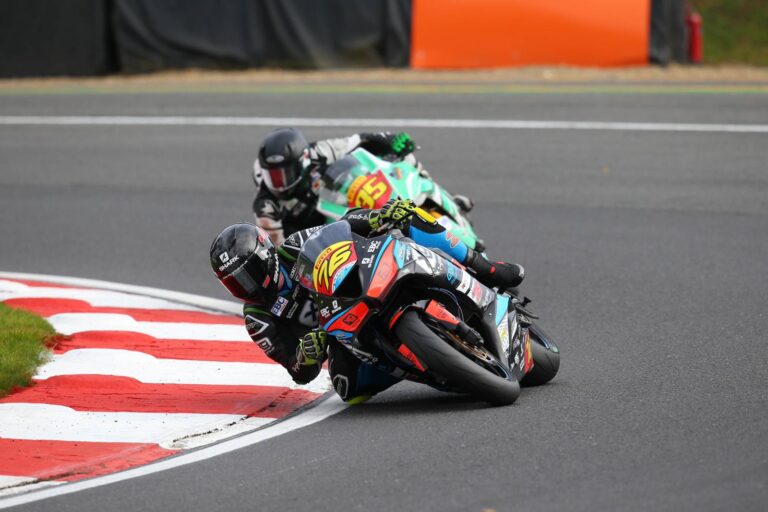 LUKE Verwey went out on a high at the final Pirelli National Junior Superstock round of the season at Brands Hatch this weekend as he took big positive strides.

The 22-year-old from Silverstone smashed his personal bests on the famous GP circuit and heads into an exciting off-season looking to carry his momentum.

In sketchy weather conditions during Friday’s opening practice, the Team XG Racing Kawasaki rider laid down times good enough for a top-14 spot before rain set in, but he was back out setting even more personal bests in a sunny FP2 where he pushed on to finish the session 15th overall.

And while he qualified 16th, he was buoyed by a tight fight for the top spots – with just half a second covering the next eight positions up the order.

He suffered a difficult start which dropped him to 19th on the opening lap of race one on Saturday afternoon and lost another two places early on as he jostled for position, but Luke clawed back time and rejoined the top 20 and eventually crossed the line 21st after a hair-splitting battle for 18th.

Lining up just ahead of his brother for the final race of the season on Sunday, Luke held his ground as the lights went out and while he briefly dropped two places, he recovered late on to take the flag in 17th, just a few seconds outside the points with another second sliced off his personal best lap time.

Luke Verwey:
“It was a very positive weekend,” he said. “Again I knocked lots of time off my personal bests – something like 3.5 sec – so I’m really happy with how I was riding.

“Going into the last race I felt like everything was coming so easily and clicking, and I felt like I did really consistently low lap times which is what I was aiming for. I wanted to just get as consistent as possible, no stupid run-ons or anything silly like that which can ruin a race.

“I finished on a high, sadly wasn’t in the points but the positive is that I’m progressing every time I’m out so it’s just a matter of time.