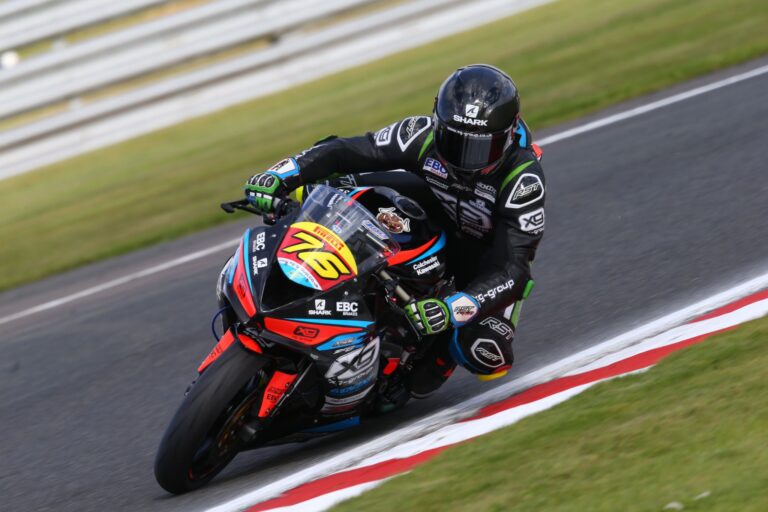 LUKE Verwey is taking the positives from a roller-coaster weekend in the Pirelli National Junior Superstock Championship at Oulton Park as he gears up for the penultimate round of the season.

As the series heads to one of his favourite tracks, Donington Park, in just a few days’ time, the Silverstone-based racer is gunning for a points finish after leaving Cheshire on an upbeat note.

The session started out cold and damp on Friday morning and was soon brought to an abrupt halt due to a red flag caused by another rider going down. With this taking a chunk of the track time away, the decision to abandon the session was made as the conditions wouldn’t conclude base settings.

The Team XG Racing Kawasaki rider hit the track for FP2 as the sun began to break through it soon revealed changes would be required to improve handling.

Luke then headed for qualifying on Saturday morning, where conditions took a slight turn for the worse as he finished 25th, revealing further setup issues.

With a solid launch as the lights went out for race one that afternoon, the 22-year-old quickly made up a few places on the very first lap before breaking into the top 20 on lap two and even running as high as 19th at half-distance.

And while he was caught up in a group battle for 20th, he managed to bring it home in 22nd place.

Further changes were made and lining up 24th for race two on Sunday, Luke made another solid start and moved up a place on lap one before picking off two other riders on lap five and another on lap six as he sat 20th.

He made another pass four laps from the finish and held off the chasing pack all the way to the chequered flag to pick up 19th spot, wrapping up his weekend on a positive note.

Luke Verwey:
“I struggled with bike setup the whole weekend. Going into race one I had quite a good race pace but still needed to make some changes to the bike, so we were using that as a bit of a test to see where we could improve the bike,” he said.

“I started P24 for Sunday’s race and finished P19 – having gone faster than before, taking the positives out of that and seeing the changes had worked.

“We’ve got our base settings for Donington, I know I can push on and I want to try for a points finish.”

The series resumes for its penultimate round at Donington Park this weekend, October 1-3.