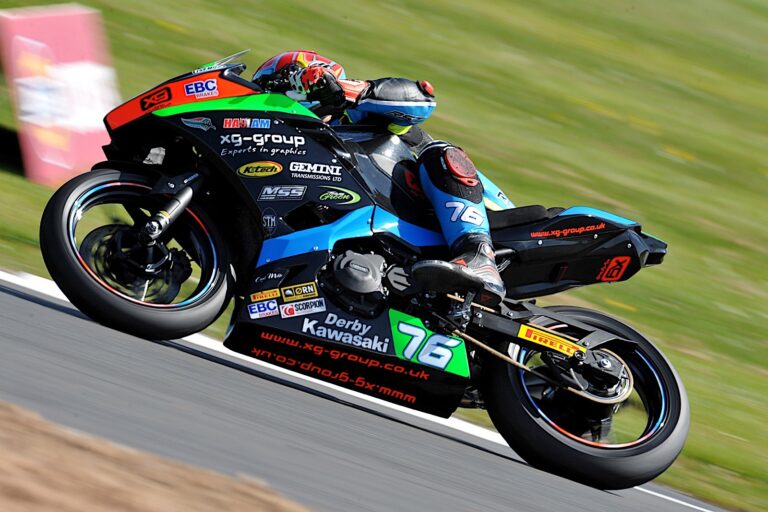 Luke Verwey has clearly worked hard in the off season! Fast throughout winter testing, he made it count at Silverstone for the opening round of the 2019 British Junior Supersport Championship, racing hard to a brace of tenth place finishes in today’s two fifteen lap races.

Qualifying on the second row, Luke made a good start in the opening encounter before slowly dropping back from the leading trio. Keeping himself in the mix throughout thanks to some aggressive riding the #76 rider eventually crossed the line tenth, fully aware of the gearing changes needed for race two.

Race two was another hard-fought affair with Luke once again in the mix for the top ten from the word go. A series of quick laps in the closing stages saw him lapping as fast as the top four, the XG Racing rider crossing the line in tenth for the second time in as many races after an intense race long battle.

Luke Verwey:
“Qualifying went well even though I still wasn’t able to get a great tow, but I managed a decent lap even without the slipstream. On paper the races were going to be close, with so many of us lapping within the same tenth of a second. The plan was to get a good start and see how the race panned out. I knew that backmarkers could come into play so had a plan on how to use them to my advantage if I was in the leading group. Race one was pretty good in the beginning, but it soon became clear that we had opted for the wrong gearing and I started to drop back. I had the ninth best lap time so that meant a third row start for race two and I was ready to fight and make amends. I had some amazing battles in race two. I finished tenth again, was running eighth for most of the race but I ran wide on the second last lap. I didn’t want to bin it so in the end and with no time to make up the time I lost I settled. All in all it was a decent weekend at one of my worst tracks so I am taking the positives and I promise you I will be up there at Donington! Massive thanks to all my sponsors, see you at round two.”