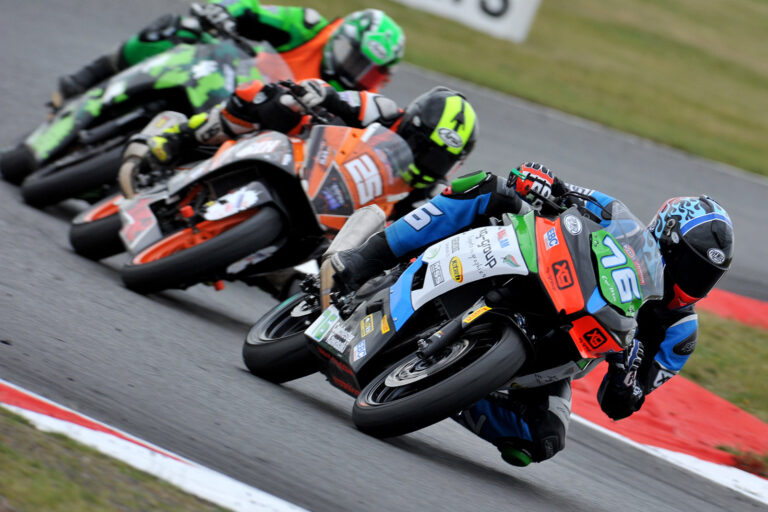 Luke Verwey bounced back from a difficult weekend at Snetterton to grab five well earned British Junior Supersport Championship points after charging from the back of the grid to eleventh yesterday.

Fresh from his World Supersport 300cc debut at Donington Park where he competed as a ‘wildcard’ Luke had been looking forward to getting back on track, with the prospect of adding to a season’s best of fourth high on the agenda.

A string of technical issues meant it would be an uphill struggle for the #76 rider, but nevertheless the XG Racing rider dug deep when it counted, charging through the field from 22nd on the grid to finish a well deserved 11th at the end of a hard fought 10 lap race yesterday.

Sitting 9th overall in the championship, and with plenty more races left to run, Luke is looking ahead to the next round in Scotland at the beginning of July.

Luke Verwey:
“I crashed on the out lap of qualifying which put me at the back of the grid for race one which was not ideal. Everyone worked so hard to get the bike fixed but in the race the bike kept cutting out which meant a DNF. We had no warm up on Sunday so I had to start at the back again. The bike felt underpowered, so we will have to fully check it before Knockhill but at least I was able to race. It was an ok result which at least meant more points and five is better than none but for sure I want more and I know we can do it. Well done to Kade on his win and a massive thanks to the team and to all my sponsors for working through the night to rebuild the bike. See you all in Scotland.”