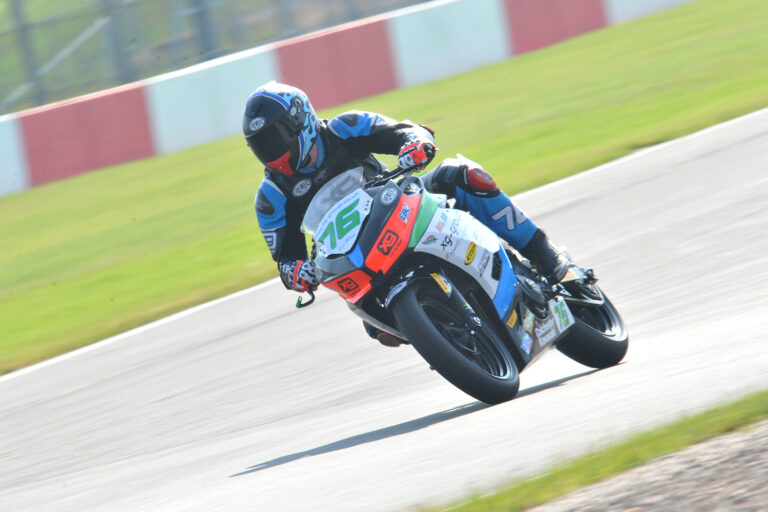 Luke Verwey finished a respectable 29th at Donington Park on Sunday after making a wildcard appearance in the Prosecco Doc UK round aboard his XG Racing Kawasaki in round four of the FIM World Supersport 300 Championship.

Verwey, who is front running in the British series, had to contend with mixed conditions throughout the weekend after heavy rain and a small crash on the opening day reduced the dry track time available to all competitors.

Qualifying alongside his brother, Luke rode a sensible race, smashing his own personal best lap time around the 2.5 mile Leicestershire circuit by more than 2.5 seconds during the 13 lap encounter.

In addition to racing alongside the world’s best Luke had a full weekend of media commitments including commentary at the WorldSBK Paddock Show and participation at Saturday’s SuperShow in front of thousands.

Luke Verwey:
“Friday’s Free Practices were held in wet conditions which I don’t mind and I actually got up to speed quite quickly. I felt really comfortable, especially with the changes we had made since the opening round of BSB. I crashed at the end of FP1 so unfortunately wasn’t able to make it out for FP2 as the quickshifter wasn’t working. Saturday and Superpole was a new experience. It was tough I hadn’t had the benefit of the dry FP2 and hadn’t been able to try the gearing I wanted. It stuffed me a bit but in the end I made it onto the grid which was the target. Raceday was hectic, but what an experience. Going on stage at the Paddock Show during the Supersport race was so much fun and it actually calmed me down a bit. The race itself was actually really good. So many people were falling off so I said to myself keep it on two wheels and learn and that’s what I did. My lap times were so much quicker than in BSB and I improved ten places from where I qualified. I loved the whole World Superbike experience and really want to be there full time in the future. I want to say a big thanks to all my sponsors and to my family for making #UKWorldSBK happen!”