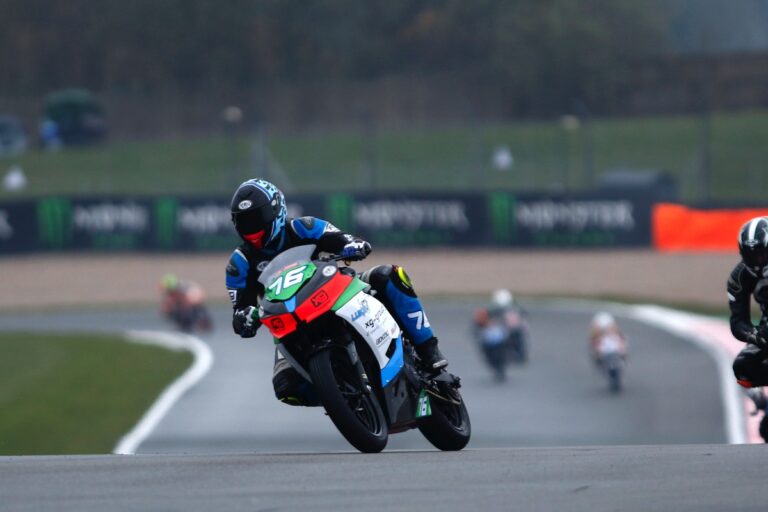 Crossing the line 4th at the end of 7 hard fought laps on Saturday, the XG Racing Kawasaki rider can look ahead to the remaining races confident that he is a title contender despite crashing out of contention in today’s second encounter.

The second race of the weekend got under way in difficult conditions on a drying track with Luke gambling on wet tyres. The gamble seemed to be paying off in the early stages with the youngster able to maintain a strong pace that once again kept him in the leading group.

A damp patch at Redgate corner at the start of lap 6 was to be his undoing, but nevertheless Luke remains confident and optimistic of the year ahead after the opening two races of the season.

The earlier rain and cold temperatures meant that the weekend’s third race was cancelled on safety grounds. It will be run at a future event.

Luke Verwey – 4th & DNF:
“It’s been a pretty good weekend overall. I qualified 3rd for race one and was really looking forward to getting the season underway. I was expecting it to be close based on the times in qualifying and it turned out that way with me, Kade and a couple of others all in the mix in race one. I finished 4th in race one and whilst it’s good points on the board in terms of the championship I wanted more. I didn’t see the last lap flag but all in all I can be happy with the race. It was a close race and I really enjoyed fighting at the front, especially as the rain stayed away. Today’s race was another close one, and I felt good having chosen the wet tyres but I hit a damp patch and got fired over the top. I’m ok and that’s the main thing and I know now that I have the speed and the bike to run at the front for the rest of the season. Well done to Kade on winning race 2, it’s been a good weekend for XG Racing and the family.”